When the 1914-1918 war broke out, there was a need to find accommodation for the New Army. In many areas, training and transit camps were established for troops leaving for, and returning from, the battlefields in northern France. One of these areas was the village of Fovant, in Wiltshire and its neighbours Compton Chamberlayne and Sutton Mandeville. The villages and the fields in the shadow of the chalk downs became a military camp, complete with barracks, a hospital, parade areas, shooting practice ranges, a camp cinema and YMCA huts. A military railway was constructed to serve the camp, branching off the main line railway from London to the southwest. 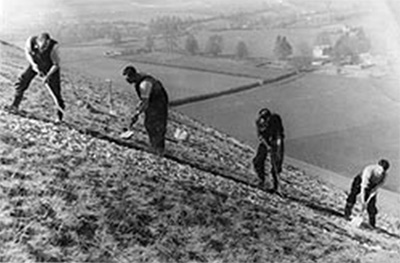 Thousands of men from all parts of Britain and overseas lived for a while in the area, passed on to the Western Front and returned from it. Many never returned but gave their lives on the battlefields in France. Others died of their wounds in the hospital or from disease. Rows of silent War Graves in Fovant and other nearby churchyards are testimony to their presence. In remembrance of their colleagues, many of the regiments carved into the hillside replicas of their cap badges. Many of these no longer survive, but by the end of WW1 there were some twenty discernible badges.

Local workers from Fovant and the surrounding villages, supported by Regimental Associations maintained the Badges after WWI. During WWII, the badges became overgrown in order to disguise landmarks, which might assist enemy aircraft. Weather and time, as well as the effects of grazing cattle, caused decay. After the end of WWII, the Fovant Home Guard platoons formed themselves into an Old Comrades Association and undertook the task of restoration. It was in the period of 1948/51 that the two Wiltshire regimental badges were cut and in 1970 the Royal Signals badge was added.

In 1961, the Old Comrades Association was reformed as ‘The Fovant Badges Society’ with redefined, more positive objectives related to the maintenance and preservation of the Badges and the holding of the annual Drumhead Service.

The Society became a charitable organisation and in 1994 adopted a new constitution, which governs its operation and objectives; these are the preservation and maintenance of the Regimental Crests cut on the chalk downs and the education of the public. 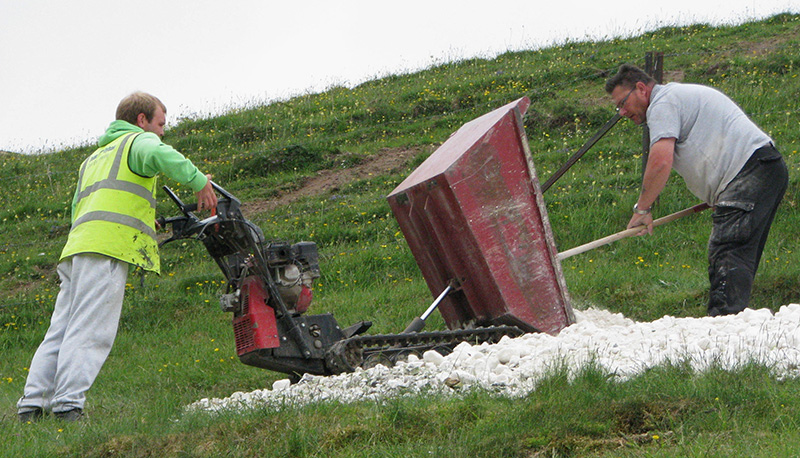