(Prince of Wales’ Own Regiment) 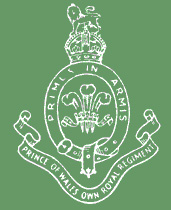 On 5th March 1794 Mr Pitt proposed in the House of Commons various measures for strengthening the internal defences of the country, as a result of which a meeting was held at the Bear Inn, Devizes and ten troops of Yeomanry Cavalry were raised in Wiltshire, eventually being formed into “The Regiment of Wiltshire Cavalry Yeomanry” in 1797. The honour of “Royal” was bestowed in 1831. In 1863, in recognition of the distinguished honour of forming an escort to HRH The Prince of Wales, a new title of “Prince of Wales’ Own Royal Regiment” was received. In 1884 HM The Queen authorised a table of precedence for the several regiments of Yeomanry in Great Britain and the position allotted to the Royal Wiltshire Yeomanry was Number One.

As you look at the badge today, all that remains of the original is the Prince of Wales’ feathers. The belt containing the Regimental motto “primus in Armis” and the scroll with the Regimental title together with the crown and lion have long since disappeared.