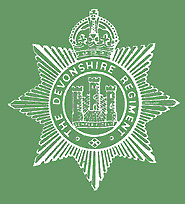 The Badge consists of an eight pointed star in silver, the centre enscrolled “The Devonshire Regiment”. Within the scroll is the Castle of Exeter (Rougemont Castle) in silver on a blue ground with the Regimental Motto, “Semper Fidelis”, underneath. In place of the top point of the star is the Queen’s Crown in gold.