Introduction
The advent of the Centenary of World War One has presented the Fovant Badges Society with an opportunity to widen the appeal of the Badges Memorial to a wider and younger audience thus securing their long term future.

The Trustees of the Society have decided that this most important centenary can best be marked by the building of a new badge on the hillside to join the other eight badges. The design will be a poppy of 25m diameter with “1916” and “2016” legends. As far as possible the new badge will use construction techniques that would have been familiar to the soldiers stationed in the area in World War One.

Many options were considered by the Trustees before deciding on the poppy design. There were around 20 badges created in WW1 and the Trustees regularly receive requests for badges to be restored. Restoring one badge during the centenary will almost certainly lead to demands for further restorations. The Society does not have the funds to maintain two or three more badges. It was also thought that restoring the badge of a long defunct regiment would have only limited appeal to a younger and more national audience.

The poppy design (by Rupert Williamson of Fovant) was chosen because it directly relates to the poppies that grew in “Flanders Fields” where so many soldiers fought in WW1. The wearing of the Royal British Legion “Poppy” is the way that we all remember the sacrifices made by British and Commonwealth service men and women since WW1. It is an image that we all relate to and understand and we are sure that those soldiers stationed at Fovant 100 years ago would have understood and applauded our desire to follow their example and build a chalk “badge” on Fovant Down.

English Heritage Scheduled Monument Consent
The Society have already completed many archaeological and location surveys of the proposed site for the Centenary Badge and have also considered many alternative locations before deciding on a location in the large gap between the Post Office Rifles and The Devonshire badges.

All this work was summarised in a report submitted to English Heritage in August 2014. We are pleased to report that permission to proceed with the agreed design at the agreed location was granted to The Fovant Badges Society in October 2014. We should add that the landowner Mr Ed Williams has also kindly given his permission for this project.

Some images of the agreed design:

Image showing how the badge will look 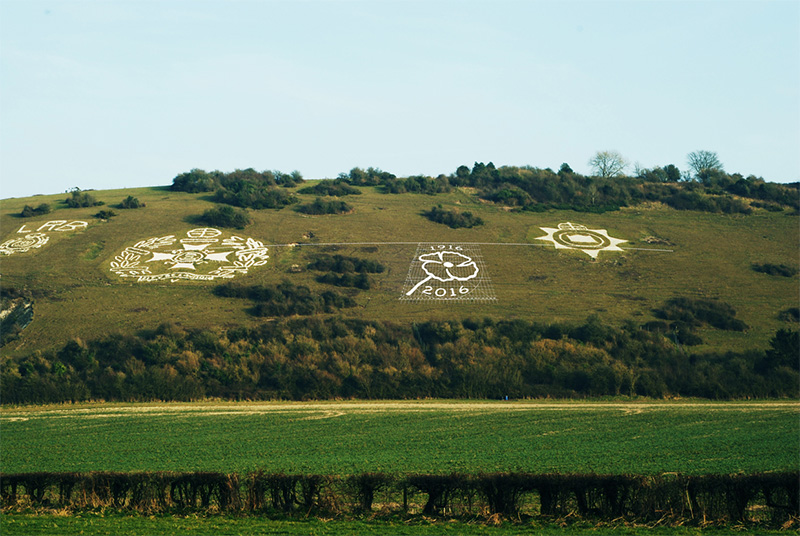 The Centenary Poppy has now been completed

Thanks to all the help received from our many volunteers we completed the Centenary Badge in July 2016. As a result of their tireless efforts on the hill the new badge only took two and a half weeks to build instead of the six weeks that we had planned for. 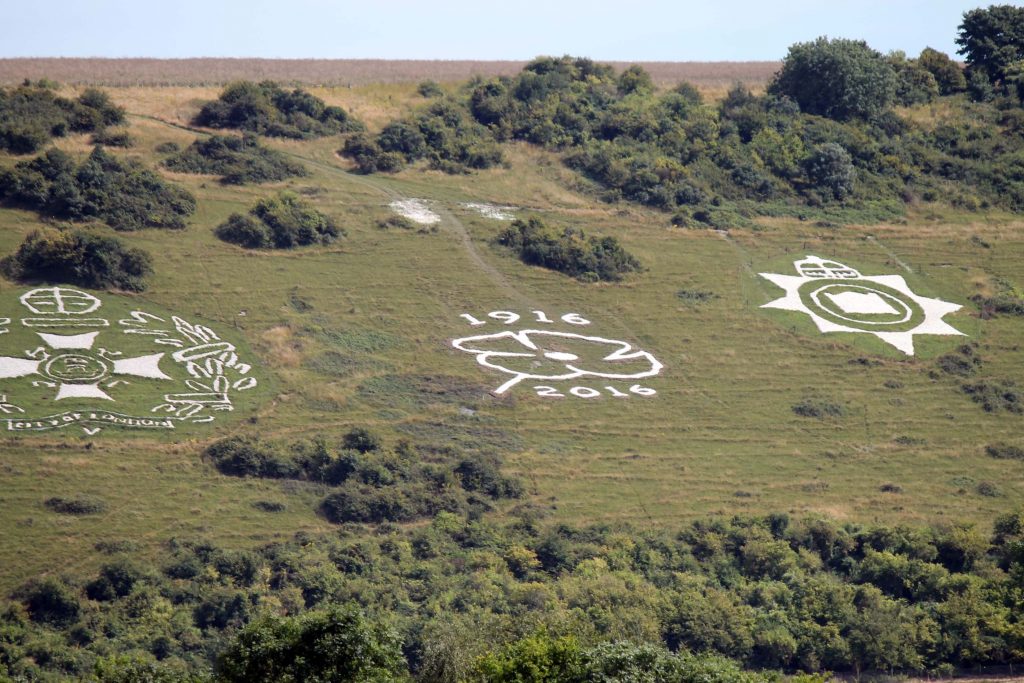 The Centenary Poppy between The Post Office Rifles and Devonshire Regiment Badges.