During World War 1, Fovant Camp was established as a training base for thousands of soldiers. The YMCA provided facilities for those soldiers, including moral and spiritual support.  The huts provided a comfortable and homely sanctuary for soldiers, supplying food, tea, cigarettes and a place to rest and read. By 1916 the soldiers knew where they were going and what the fighting conditions were likely to be, so they certainly needed that support.

During this period the red triangle was adopted as an easily recognisable emblem of the YMCA war work movement. It soon became a familiar symbol, its three sides representing the growth of ‘mind, body and spirit’, which were – and remain to this day – of fundamental importance to the YMCA.

Although the YMCA organisation (“The Y”) of today has changed considerably since those days, it is nevertheless fitting that their support and guidance should be remembered alongside the regimental badges on Fovant Down. 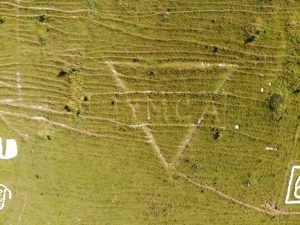 The YMCA emblem on Fovant Down was not included in the original 2000-2001 restoration project.  It was the last remaining chalk feature on Fovant Down yet to be restored. Over the years, the emblem faded into the surrounding grassland, although a feint outline could be seen from the A30 layby.

So Fovant Badges Society decided to restore the emblem. See Restoration of the YMCA Emblem page for more details.